Skip to content
I was going through some of my files and I came across this write-up that I had written as a part of the course, History of Graphics Design in Coursera. It seems [surprisingly] well written and was also lauded by my evaluators. I thought it was worth sharing! To set a context, I had to write about how the trends of advertising strategies have changed over time and I had to pick a case-study to analyse as well. 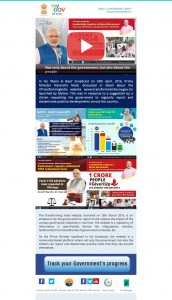 So, I chose this e-mail from the current Government of India. It was quite interesting to see that the current government has chosen to continue using technology, and not just limit themselves to during the elections. This is how a typical mail from the government looks like. You do not need to actually see what’s written to drive my point home. Just notice the amount of writing, and the placement of the graphic elements in the mail.

The following is me quoting myself:

The product that I’ve chosen is an e-mail advertisement from the Government of India. The National Informatics Center (NIC) has created the email. The email serves as an information brochure to the citizens of the nation. It’s very convenient to track the government’s progress and get the updates on the new schemes that the government proposes. This is never seen before in India and is very unlike the previous governments that were in power. From a different perspective, it serves as an advertisement to the current government. By the time, the next elections take place, they would have already spread their word and would have a stronger foothold on the population.
We see a lot of national programs starting off in the country, and email is a very cheap mass communication means. This is obviously one strategy, the strategy of mass communicating. But what I want to talk about is an outdated strategy that they have adopted in their emails. If you have a look at the recent mail (attached), it feels very unprofessional. It is also  inconvenient to go through the mail with so much written around. The programs are defined and it’s functionality is over-elaborated, all cramped in one place. True that this email is to spread awareness about the national programs. We know awareness programs are taken up when the information spread has not happened efficiently. But how much awareness can you spread if the awareness program itself is inefficient?! An analogy can be drawn directly to the last video “Words doing the work”. Advertisers used to follow this strategy, but later the trend that followed, as we can see was that of a minimalistic style.
One probable reason they have used this strategy is because they do not have so much to sell, as to offer us  information. Although it is an advertisement of sorts, they can afford to not adopt conventional strategies because they already have our attention. We want to know what the government has to offer because we are paying our taxes and we need to read the benefits now. This is certainly different from the case where, say someone is trying to sell me a phone. They do not have my money yet, so they need to lure me in. They make it as easy as possible for me to buy their phone.
Another possibility is that because the Govt. of India is trying to provide us information and not sell something off to us, and also because the strategies are unimportant to heed to they don’t have to invest much on advertisements. Such poor budgets in advertisements would only allow them to hire poor ad-designers.
On the closing note, since they do not have much incentive to better it (unlike advertisers), I believe it’ll be a long time before we see a more conveniently readable informational emails/posters.
(A random) Observation:
Did you realise that to sync the singer’s lips in a slow motion music video (Take Hymn for the Weekend by Coldplay for instance) is not so trivial.

During the shooting, the song has to played in faster than actuality to assist the singer in lip sync!

Elaboration:
In other words, if one wants to make a slow motion video for a song, the audio must be at the same tempo, but the video is on a different “tempo“. This must be compensated! So, if I want the song video to be going at a rate of 0.75x, while shooting, the singer has to sing the same song at 1/0.75x or 1.33x.

Similar idea goes to music videos where the video is played faster than the song (Friday by Rebecca Black… er… rofl… no? haha). No hate please. She’s already had a hard time making the video probably!

It was ought to be an occupied weekend. But you know how the brain works. The worst kinds of distractions occur when you’re supposed to be focused on the task at hand!
So I was “preparing” to start the research on what I was supposed to know for the summer internship program. “Preparing” I was for over 10 hours. Every little [irrelevant] thing seemed interesting (and in my defence, they were all interesting)! With me goofing around for way too long came the afternoon. It was dark. The weather!  The weather was dark and was quiet!
It was very calm and peaceful, just the right amalgamation to trigger the nature admirer in you! And soon it started pouring. It was a little windy too. I went to the balcony to admire the rain (an admirer that I had now become!). Then I saw the tiny droplets. They were spherical, like a pearl, unlike the other heavier droplets. They were tiny, but not puny. The life of a raindrop is to reach the earth from the skies. The heavy raindrops are focused. They reach home, the earth the fastest, but what about all the grandeur, all the magnificence that they have missed as they journey from the heavens to the mother earth? Sure they might be a whole lot faster than the tiny pearly droplets, but how good is that really?
Life is like that. The lighter (and simpler) the life is, more freedom you feel. I know I might sound a little trippy but, you stumble upon new ideas only when you let yourself free. Only when you can take your time out to look around and admire what lays in front of you, to explore what is hidden from you, and to question what is beyond you. Only when you drive yourself towards the destination without missing out the journey. Only when you be that little carefree droplet.
FLY, EXPLORE, DEBATE. LIVE.

P.S.: Too much of this would just be goofing around and I’ve realised that it’s not all that desirable! Oh and if you’re wondering on why does it rain like it does, this here might be a good place to start!

Read the first post/context here
UPDATE 1.2
And this one’s amazing!
Let the video do the talking!.. 😀

You can customize what really happens at such events though. May be even add a few peculiar events (like when shut like a book!?!… No?.. okay!… :D)


UPDATE 1.1
Finally came up with something (with the accelerometer!..)
Using it to shift workspaces on Ubuntu! 😀
A little annoying as of now, but… not being a pessimist, with a lot of changes and a lot of testing, it should be good to go!!..
=]
Here’s a small demonstration of what it is as of now! 🙂

Video
Here comes another break, and with it comes yet another… ?? … breakthrough?.. 😀
Anyways, I’ve finally managed to read the accelerometer(?!!) data from my laptop!..
“Accelerometer in a laptop?” you ask?.. well yea, most of the HP laptops and a few Dell ones apparently have an accelerometer to make sure that the HDD read-write head does not damage (or get damaged ) due to a sudden jolt, which might at worst cases render the HDD waste!
One thing that has baffled.. Okay yea an overstatement. One thing I could not figure out since the day I’ve found out that my laptop has got an accelerometer and that pretty much all the HP laptops do, is that why haven’t people used it to build something cool?!!
If not dedicated programs, just make virtual devices linking it to a steering wheel maybe?!
And yes, I’m trying to do the same (with little success though! :D)
Here’s the second phase. (The first one was discovering that I had an accelerometer at all!!)

P.S.: : I’ve realized (a little late though!) using the laptops is not as comfortable as lifting and turning around a tablet or a phone!! Especially if yours is a 2.6 kg one!
But still, there must be some cool application of it. THERE MUST BE!..