Well. Here I am. Bitching more about the crappy system of Narayana like institutions.
As proposed, went to check out the options and details about the long term coaching. And as expected, they were real mean. “No, sorry. We can’t get him on board. We need students who have performed well in the previous exams.” I ask, what the heck would they do to people who’re already elevated? Use them to make money? Hell yeah. They’re no better mature than an average school kid. The only thing that’s changed is the greed the whole of the devil mind is directed to. Towards MONEY. The DEMON. The root of all the evils.
Abbe, understand our damn problem. My family can’t before another house here. They can’t direct half(more than half actually) of their attention towards me for yet another year. Sometimes, I wish life was a fairytale. It isn’t. Had some problem believing it. Not anymore. They ain’t no fools.
They have a huge mastermind behind the drama. Well I realised, this is how it works. The principle of their institutions.
What happened today was real annoying.
They have it so clear. All the institutions are different bodies. There’s no real relation between. The fee structure wouldn’t be the same everywhere. The rules wouldn’t be the same. Ask then about the other Narayana campus, “It’s their will. Depends on what they choose”. There’re nothing that’s relating one to the other.
Except. Except for the name. Yeah. The whole crap is individualistic. But for the success. The “ranks”(they seem to have an entire different picture of the ranks). The success though is shared with every campus. Thus making more money irrespective of where, or who owns the campus. Make an institute named Narayana. I’m sure there are enough number of fools who’d blindly come in to you!
And they feel like they’re on the top of the world. Well Narayana people, YOU ARE NOT.
YOU SO TOTALLY SUCK.
As Praneeth Chilkalapudi says, jump in a glass of water and die.
And i’m no innocent face too. I’m the most guilty. If I did have a better performance, the life would’ve been much more simpler. So much more happier! 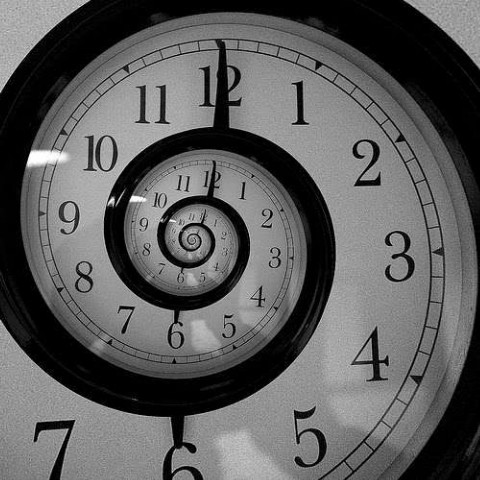 Just like everybody, time travel fascinates me too! So, whatever I do, I try to link it up to time travel! And sometime ago, I’s studyin about the Doppler’s effect in sound waves, and an argument kept buggin me. [The below discussion’s not just confined to sound, obviously!]

When we approach a stationary source, from, Doppler’s law, we can deduce, the frequency does increase. But, this would also mean that the number of disturbances [caused by the waves], that we pass in an unit time is increased too.
So we’d hear the sound, somethin like, when it’s fast forwarded.
And, when we move away from the source, faster than the speed of sound[in that medium], it’d be like, we rewind the disk and play it again (I know i’m bad at analogy, but this should do it). Like, you hear it once. Speed through the medium[without disturbing the original sound wave], reaching some point it’d reach, before it does. Then, we’d hear it again!

Now, what exactly we associate time with is, the events and their order of taking place. Like, the most common example, a cup falling off a table onto an uncushioned floor and it breakin. We’ve never witnessed its opposite. The thermodynamics state that the net entropy change of the universe can never be negative. So, the cup stickin back together is practically impossible when left for itself. If we do find some way to stick it back, then the net entropy change of the universe is again positive.

But what I think is, there’s one way to witness the whole event yet again. Yeah, this’s where the Doppler’s discussion comes in. It’s just like when you’re lookin at a star, a million light years away, we’re lookin into its history. We’ll never know if the star is still active at the moment we’re lookin, till we find a way to propel ourselves to the speeds of light. One thing which puts us on hold is this strange behaviour of light. Experiments show speed of light is not a constant. For instance, if for you(assumin that you’re on earth, stationary with respect to it), the speed of light is “c”, then for someone, who’s on a moving spaceship, the speed would still be “c” alone. So, this makes backward travel of time impossible for now.
But, the forward travel would still be possible since it’s not a compulsion to travel in the speeds of the range of light. Even a fraction would just do fine.(which is pretty difficult too!)
🙂
David Thorne narrates one of his childhood experiences!
As quoted,
” When I was about twelve, I read
that time slows down when
approaching the speed of light
so I constructed a time machine
by securing my father’s portable
generator to the back of my
mini-bike with rope and
attaching the drive belt to the
back wheel. Unfortunately,
instead of traveling through time
and finding myself in the future,
I traveled about fifty metres
along the footpath at 200mph
before finding myself in a bush.
When asked by the nurse filling
out the hospital accident report
“Cause of accident?” I stated
‘time travel attempt’ but she
wrote down ‘stupidity’. “

Being interested in astrophysics, I usually watch all the videos I get just wish I could understand it a bit!!

We started off finding two rulers, a nail and some clay used as masses.

We had no measuring instruments, hence had to go to a nearby grocery to measure the masses! 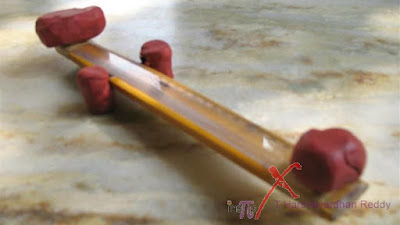 Found the weights and the tried to find the centre by taking different masses.

We got the ratio of the masses, the centre…………………but then we were struck knowing not what to go further on!!……………and in this way our science experiment was an utter flop!!!!

Just take a look at these stupid notes (with no sense!!) 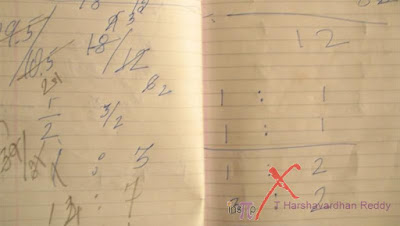 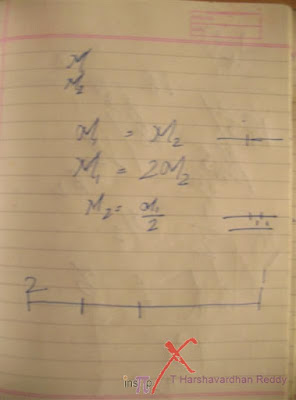 Wondering………if anything will go right,
Or if anybody……..set my soul alight.
It’s not everything you wish, not everything you want,
This obsession, in my mind’s going rampant.
When all of it goes odd to you,
It’s now the time to find your clue.
Even though if you feel all odds against you,
It can’t rain everyday, It don’t rain forever.

None’s gonna remain here constant,
This world seems a place of scant.
You gotta get yourself used to a change,
Or it is for sure, you’re out of the range.
It’s time now to show who you are,
The time to make the world at you glare!
Even though if you feel all odds against you,
It can’t rain everyday, It don’t rain forever.

You can’t hide yourself from the miseries,
No more fake tears, it’s only binaries.
This world is, in expression devoid,
You can’t avoid the people you love, nor can you love the people you avoid.
It gets complex day by day,
You just can’t throw ’em away.
Even though if you feel all odds against you,
It can’t rain everyday, It don’t rain forever.

You walk down till here everyday,
Still finding out of it, no way!
I jot down these words for myself to relieve,
From the pain of domination, that everybody give.
This world to everybody really mystifies,
To persist, you need to be more and more wise.
Even though if you feel all odds against you,
It can’t rain everyday, It don’t rain forever.

They come, They go,
They die, They prosper.
They know that human race lasts not forever.
Long ago, hit the meteorite, and formed a crater,
Leaving behind no life of a dinosaur.
It may again happen in near furure,
But they still try to peer into matter.
Very soon there’ll be the end of our race,
But still they try to keep up the pace.
Instead of living in harmony with nature,
They try to study in wise of a chapter.
I find no mistake in the later,
But surely there’s something wrong in their behaviour.
Humans’ is a young race they say,
They have power and it’s like child’s play.
One day this power certainly brings destructon,
Now they can’t come, they can’t go,
Neither can they die, nor prosper!